International Day of People with Disability

International Day of People with Disability is all about increasing public awareness, understanding and acceptance of people with disability and celebrate their achievements and contributions.

This year we want to share some of our incredible participant stories with you. Watch and read their stories below.

Meet mum Christel and her son Xavier. Xavier lives with Spastic Quadriplegic Cerebral Palsy and Sensory Processing Disorder, but it doesn’t hold him back. Xav is much like any other 21-year-old, he enjoys a boogie and a drink a the local pub.

Check out the video to hear from Christel about their life and how this amazing family chooses to see the ability in disability. 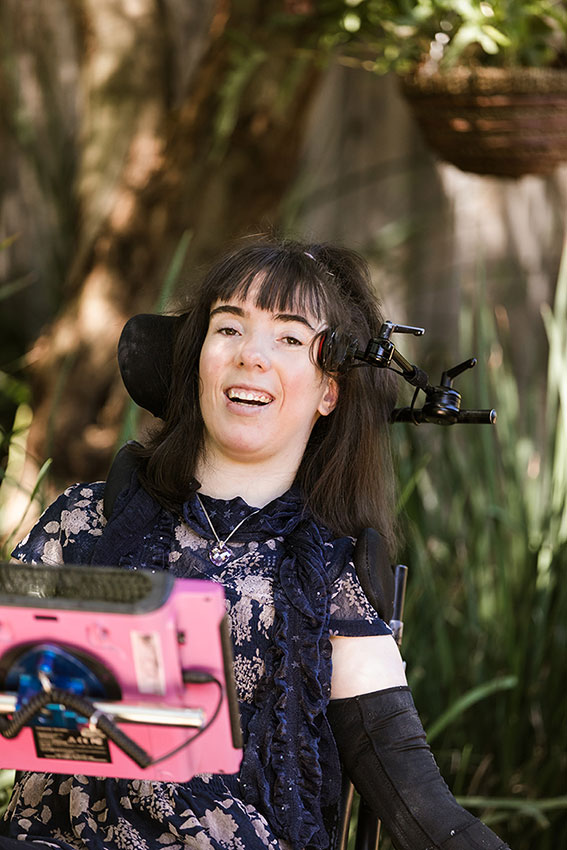 If there is one thing Kim Hopton wants you to know about her, it’s that she has a brain and she can communicate with you.

All she asks of you is to give her time.

“I’ve had cerebral palsy since I was born,” Kim says.

“My disability affects my whole body. It moves, but I have no control or fine motor skills. But I can control my brain,” she says.

“The main thing I want people in the community to know is I have a brain and I can communicate.”

The 27-year-old uses technology and therapy to help her do what her body cannot do on its own.

A powered chair helps Kim move around. A feeding tube fills her with the nutrients she needs. A speech device enables her to communicate with others.

Kim needs full support for everything she does. With that support in place – along with her happy-go-lucky attitude – she’s been able to achieve a raft of academic and personal goals.

Kim completed year 12 and then went straight to TAFE and then to Swinburne University, where she studied Certificate IV in Professional Editing and Writing. Kim graduated from that course in 2019 and plans on studying script-writing as her next venture.

“Writing is my escape from life,” she says.

“Anything can happen when you write fiction. I love writing romantic stories – usually a character like me involved with hot guys!”

Kim also fancies herself as a bit of a comedian. When she’s not writing romantic stories, she’s rewriting chapters of her favourite novels in fan fiction forums online. When she’s not reading or writing, she’s getting lost in TV dramas and following her favourite footy team, the Richmond Tigers.

When the world gets a little safer, she’d love to travel to the United States. In the meantime, she’s pretty content with her life of words and fiction.

“My motto is to read and write every day.”

24-year-old Katelyn has Autism Spectrum Disorder, but she doesn’t let it hold her back.

Katelyn strives to be independent in every way and recently got a job as a part-time pet groomer.

Watch the video to learn more about Katelyn. 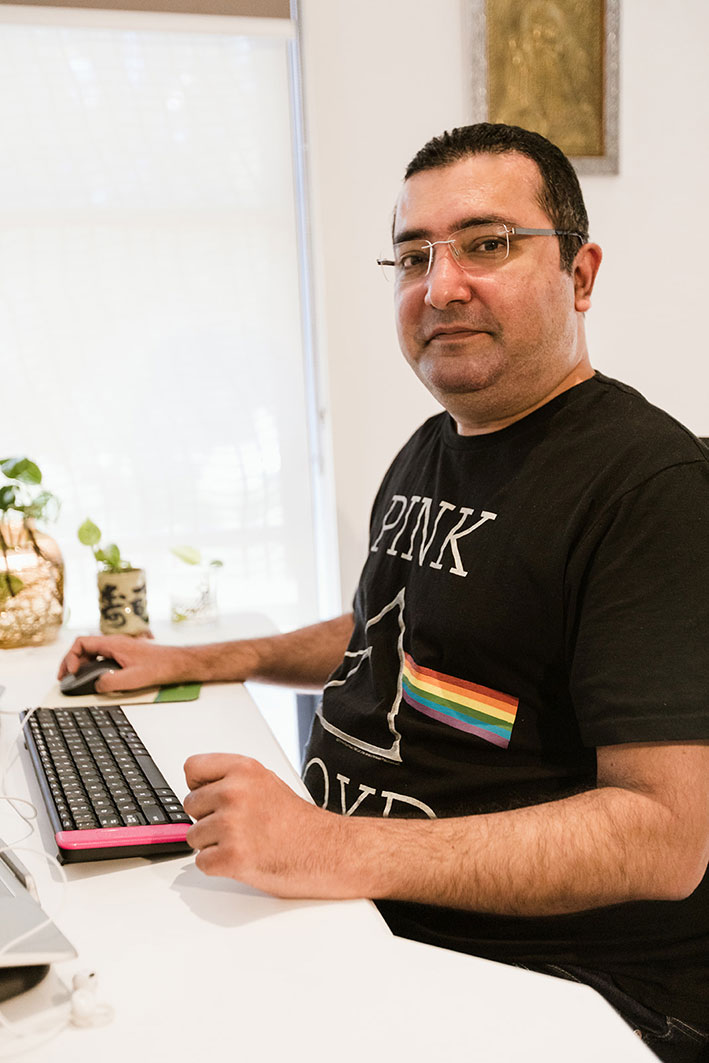 Living with a disability has not taken away Jay Shastri’s desire in life.

The 46-year-old uses splints to walk, needs help getting dressed, and is a little slower at typing emails than others. But every day when Jay wakes up, he chooses to do the best he can.

“A very long time ago, a general practitioner of mine said, ‘Jay, you’ll never run a 100m sprint in the Olympics, but you’ll probably do anything else you want to do in life’,” Jay says.

When Jay was first diagnosed with the rare neurological condition, Charcot-Marie Tooth (CMT) disease, he was shattered. The degenerative condition affects the peripheral nervous system and causes progressive weakness and muscle wasting of the legs, ankles, hands and arms. Jay feared he wouldn’t complete university, join the workforce or have the social life he knew and loved.

He’s proven himself wrong every day since.

“The choice is absolutely mine and nobody else’s,” he says.

Jay swims most days, has a personal trainer who helps him manage his physical mobility, and he and his wife love to catch up with their core group of friends. He has found a football family in the Collingwood Football Club, attending games every weekend before COVID-19. Jay has built a successful career in the finance and banking sector, and is somewhat of a mentor for colleagues, often challenging them to build resilience, think positively and test themselves as much as possible.

“I just want to do the best I can every day that I wake up,” Jay says.

Kirsten is a young mum to her beautiful daughter. Alongside her mum duties, she juggles work, her passion for supporting the LGBTIQA+ community and she lives with Spastic Diplegia Cerebral Palsy.

Watch this video to find out how Kirsten does it all. 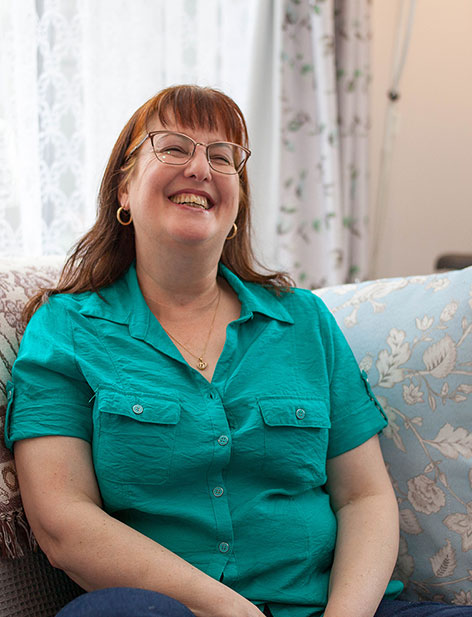 Of all the traits that make up Sharon Eacott’s character, she’s proudest of her ‘bugger you’ gene.

“If I were to die tomorrow, I think the thing I’d want people to remember is I didn’t let things stop me,” Sharon says.

“Even if my head said, ‘you can’t possibly do that – it’s just physically unlikely’, I’d still give it a shot, to see.”

The 50-year-old lives with six auto-immune diseases, is chronically fatigued and hurts everywhere all of the time. She has asthma, Graves’ disease, Multiple Sclerosis (MS), fibromyalgia, psoriatic arthritis and Type-1 diabetes.
Sharon has “good days, bad days and days from hell”, but she has learnt to accept the symptoms of her conditions and is living life on her own terms.

Her resilience has seen her advocate, not only for her own needs, but for others who are living in a world that wasn’t built for them.

Her lobbying started at her former workplace, where she couldn’t get to her desk some days because of an inaccessible building. She’s since advocated for medication to be subsidised through the Pharmaceutical Benefits Scheme (PBS), helped edit a longitudinal study that provides real-life data about MS, testified at two Commonwealth Senate inquiries, joined multiple boards, and is now a member of her local council’s disability advisory committee, creating a more accessible township.

Alongside her battle of removing trip hazards, poor lighting and unsafe pathways, Sharon’s breaking down the myth that these improvements will benefit just a handful of people.

“There is that attitude that you’re asking for something for a niche group of people who won’t use it very much anyway, and how dare you, when really this is something we can all use at one time or another,” she says.

“It sounds like I’m kicking up a storm – I’m not, really. You’re used to it being this way, and you can manage it. Just because our bodies aren’t working the same as yours, it doesn’t mean we don’t have minds and emotions and needs the same as everyone else,” she says.

“We don’t need to be included. We’re here. What we want is an invitation to participate. The things that I stir up are, ‘what do we need to do to make it possible for me to take part?’”